Column adders are perhaps my favorites of all the small adders. There is a large variety of them, and they are "natural". By the latter, I mean that you use them in the same manner that you were (usually) taught in school. That is, adding up one column at at time, writing the answer for that column, and proceeding to the next with the carry, if any. Starting from the left is the Sebastian (1898). This is about as minimal as one can get. In fact, I am not sure that it is at all useful. Next to the Sebastian is the Addachine, made by the Addachine Mfg. Co. of Portland, Oregon. It is made of tin, and is mounted on a wood block. It will add up to 199 in steps of one through nine. It probably dates from the 1930s, and is marked to cost $0.25. In fact their motto on the cardboard cover is "An Adding Machine for 25 Cents". Very cheaply made, but it works. On the far right are two models of the Stephenson Adder (1873), the top one being the earliest. The Stephenson patent was much more elaborate than the item that he actually produced. A.M. Stephenson (1844 - 1913), the inventor of the adder, was enough of a character that he has left quite a trail. It would be possible to write a small book on the man. Strange to say, a gentleman by the name of G.N. Mindling patented a device identical to the bottom of the two Stephensons in 1925 (US1585675)! How this slipped by the patent examiners I have no idea. I have not taken the Stephson apart, but I have had it X-Rayed, and the inside is exactly the same as the Mindling patent. On the following page is the Totalisateur Troncet, "invented and constructed" by Louis Troncet of 4 Impasse Du Maine, Paris. I do not have a date for this. Because an address is given, it might be possible to check 19th century Paris directories and find a rough time period for it. This is perhaps one of the simplest of the adders that I have seen: a single rotating disk permitting addition up to 99. I assume that this was made before Troncet switched to the Kummer type of adder. 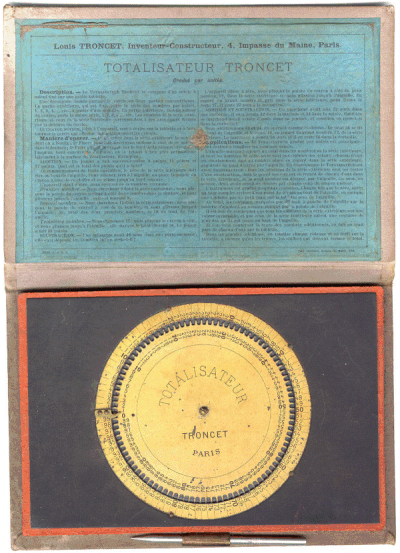 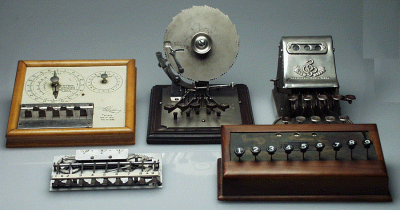 The above group shows five key-driven adders. Here there is great diversity in mechanism. Key-driven adders appeared quite early in the US (Parmelee 1850) and Great Britain (Shilt). There is speculation that the Parmelee was never build. On the other hand, at least one example of the Shilt is known. On the bottom left is an Adix (Martin 1925: 1903) taken out of its box. It is a fairly late device and relatively well made. Because of both of these qualities, it is the commonest of this category of machines. Above the Adix is an example of the Spalding (1884). This is a nine-key machine with dial output. Most key adders have nine keys. An exception to this is the Centegraph (1891) of A.E. Shattuck, top middle: it has only five. I think that it takes the prize for being the weirdest of all of these machines, and they are all eccentric. It can be roughly described as follows: it consists of two escape movements similar to those found in clocks; the escape wheels are the two circular sawblade-like wheels on top of the device. They rotate on a common axis and are connected with a spiral spring. The spring would force them apart were it not for the intervention of the twin escape movements to their bottom left. The escape movements in turn are operated by the five keys. The key on the left is the key for the five digit, and it acts on the front escape wheel: when this key is pressed, five is added to the sum. The four keys on the right are for one, two, three and four. When one of them is pressed, it works on the finer toothed back wheel, and causes the sum to be increased by an amount corresponding to whichever of the four keys is pressed. The sum is shown in a small window on the front wheel. As this wheel will rotate, the sum can be upside down! The center knob both winds and clears the machine. It seems too weird to work, but after over one hundred years, it still does. Amazing. To the right of the Centagraph is the British machine The Adder (1902). Note the snake pressed into the metal on its front. When I bought this machine it was not working. After opening it, it seemed to me that the mechanism had been taken out, as there did not seem to be much of anything there. I was wrong. I had it repaired by someone who knew what he was doing, and it now works fine. See US Patent 786,839 of 1905 for the details. Below The Adder is a Graber (1911), probably the latest of this type. It has three digits with a clearing mechanism of sorts. The Arithmeum has at least two American machines of this ilk: the Lindholm (1886) and the Bouchet (1882). All of these machines are rare; perhaps the Adix can be rated as merely uncommon. In any event, they are dear.