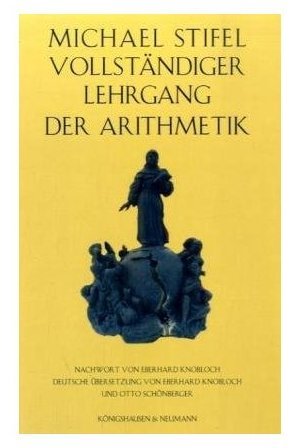 Known for his advancement of mathematics in general, and of German mathematical education in particular, Michael Stifel was a fervent Lutheran given to sometimes bizarre numerological theories. As a mathematician, he was one of the first to use plus and minus signs; developed a system of logarithms independent of John Napier (1550-1617); and helped make algebra more comprehensible to Germans by writing about it in their own language.
Born in the German town of Esslingen in 1486 or 1487, Stifel became a monk in his twenties, and in 1511 was ordained to the priesthood. Almost immediately, however, he found himself disillusioned with aspects of Catholicism, in particular the church's habit of paying its officials out of alms collected from the poor. Similar issues had begun to enrage another Catholic monk, Martin Luther, who in Wittenberg in 1517 would post his 95 theses challenging the established teachings of Catholicism.
By 1520, Stifel's interests in numbers and his growing antipathy toward Catholicism had led him to a complicated numerological interpretation of the prophetic biblical books of Daniel and Revelation. The upshot was that by analyzing figures such as Revelation's seven-headed beast with 10 horns, he concluded that Pope Leo X was the Antichrist. Within two years, he was forced to leave the monastery.
The next 13 years of Stifel's life were a hodgepodge, a crazy-quilt pattern in which he traveled to one town, secured a pastorate, got into trouble (sometimes through his own fault, sometimes not), fled, and repeated the cycle. Only through the intervention of influential friends such as Luther, who he befriended in 1523, and the religious reformer Philip Melanchthon, was he able to keep obtaining new jobs in new towns.
Luther helped Stifel become pastor for the Count of Mansfield (1523-24), a job he soon lost due to anti-Lutheran sentiment. Then he went to work for a powerful noblewoman, Dorothea Jorger, before leaving again to join Luther. The latter helped him find both a pastorate and a wife in Lochau (now Annaberg) in 1528, but by 1533 Stifel had been forced out of the town for preaching thataccording to more numerological calculationsthe world would end on October 18 of that year.
Luther and Melanchthon helped him secure a position at Holzdorf in 1535, and for a time Stifel's life became more settled. During the 12 years that followed, he earned his master's degree from the University of Wittenberg, tutored a number of students, and wrote all of his known mathematical works. In 1544, he published Arithmetica integra, a summation of mathematical knowledge up to that point. He followed this a year later with Deutsche arithmetica, and in 1546 with Welsche Practick. In his works, Stifel broke with the cossists, as algebraists in Germany at that time were called, by presenting a general method for solving equations to replace the cossists' 24 rules.
Stifel's time at Holzdorf was brought to an end by the religious Schmalkaldic War of 1547. He fled the town, and by 1551 had secured a parish at Haberstroh in Prussia. Eventually, however, more conflicts forced him to give up the ministry altogether, and in 1559 he went to work as a lecturer in arithmetic and geometry at the University of Jena. There he died on April 19, 1567.
Source:[