From the great encyclopedia of mechanical calculating 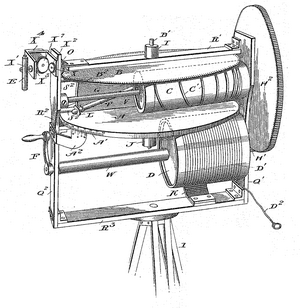 This invention relates to planimeters. The present invention, which I call a "field integraph", is based upon the well known mathematical rule that the area of a sector is directly proportional to its angle and to the square of its radius, the rule being that the area of any sector equals

is the angle of the sector measured in radians and

the radius of the sector.

The present invention has for its object the provision of a portable instrument of simple construction, embodying a novel principle of operation, which can be taken into the field where a given area is to be calculated and utilized to automatically calculate and indicate the area of a surface lying in any plane, without requiring computation.

The invention embodies an extensible device, such as a tape, wire, or cord, which can be drawn out to any desired extent, a sighting device by which the end of the drawn out tape, cord or wire or any predetermined part thereof may be observed, and an automatically acting indicating means cooperating with the cord, tape or wire and the sighting device, so that the angle traversed by the sighting device in taking the observation, combined with the length or distance to which the cord, tape or wire is extended, determines the operation of the means cooperating therewith and as a result the correct indication of area is either directly shown or indicated vernier fashion.